Tombstone of the knight Antoine

This funerary monument was acquired by the Liège Archaeological Institute in 1862.  It came from the former priory of Saint-Nicolas-en-Glain, near Liège, which was demolished in 1906.  According to the inscription: ANTONIUS M[ILES], it is probably the slab that once covered the tomb of the knight Antoine de Bolsée, the benefactor of the afore-mentioned priory.  The name of the character, the "uncial" font of the inscription and the type of armament represented allow it to be dated to the first half of the 13th century.

In particular, it is distinguished by its shape and by the extremely rough character of the engraving of the effigy to the deceased.

Its trapezoidal shape is derived from the sarcophagus lids of the early Middle Ages and the Romanesque period.  The classic rectangular model would eventually prevail, but, in the 13th century, this type of "lid coffin", like that of the knight Antoine, had not yet died out, as attested, in Belgium in particular, by rare examples preserved in churches (Houffalize, Forest, Jeneffe) and museums (Saint-Bavon and Byloke, Ghent).

The line engraving – the most basic kind – depicts a knight in armour.  His helmet protects his head completely.  He wears a hauberk, partly hidden by a coat of arms, and carries a shield.  It is adorned with the coat of arms of the owner, in this case "vair (blue on a white background) with a Gules chevron (red)", which does not quite correspond to the coat of arms of Bolsée, which is "silver (white) with a Gules chevron (red)".

The depiction of the spurs represents a problem.  At first glance, they seem to have rowels, which are roughly sketched.  Yet spurs with rowels were only in use from the second half of the 13th century.  This is undoubtedly a highly stylised depiction of tipped spurs with a cross stop, which limited the risk of accidental puncturing the flanks of the horse.

Finally, the knight is armed with a spear and is surrounded by a sword with a straight cross-guard, as was traditional at this time during the Middle Ages.
This armament corresponds to that of the elite warriors, who were led to victory in 1213 by the Bishop of Liège and the Count of Looz, against the Duke of Brabant at the Battle of Steppes.

The tombstone of the knight Antoine reflects both the aristocracy of the times' desire for notoriety, his military vocation and also the modest material and cultural means that the less well-off of his representatives had at their disposal. 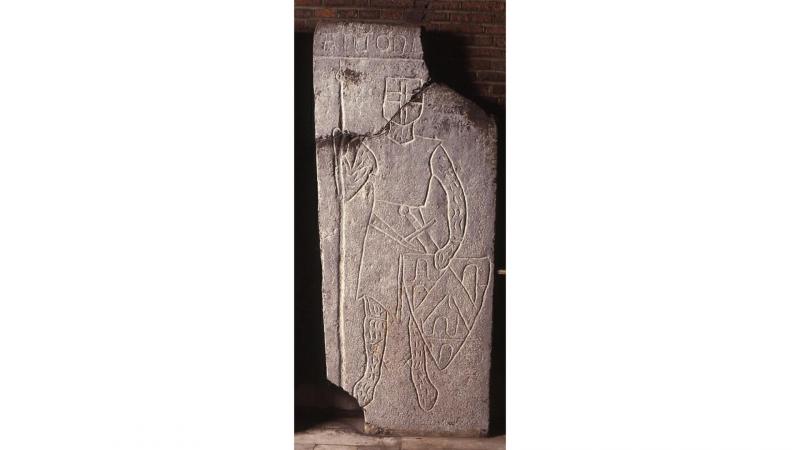