Work classified as a Treasure by the Wallonia-Brussels Federation (November 23, 2010)

A goblet with a silver foot, it is embossed, chiselled and engraved, and partially gilded with hallmarks:a  two-headed eagle without a date; GH or HG in monogram; the letter L; striche.

It is chiselled with many intertwined motifs: garlands, gadrooning, flowers, scrolls, foliage. Twelve imperial silver deniers from the Domitian reigns (81–96 AD) to Antonin le Pieux (two coins) (138–161 AD) are enshrined in the flat goblet. The oldest coin was minted in AD 85 and the most recent between 152 and 156 AD. Depictions also include effigies of Trajan (two coins), Hadrian (four coins) and Faustina the elder, the wife of Antoninus Pius (three coins).  The selection of these coins does not appear to be a matter of chance, but rather the reflection of a choice among the collections that were accrued by the scholars of that time.

In the centre of the flat bowl are the coat of arms, surmounted by the episcopal hat, of Prince-Bishop Robert de Berghes, to whom the bowl's first owner, the alderman of Liège, François d'Heure – known as Oranus – was a private advisor.

The bowl rests on a baluster leg, which is decorated with four female heads in relief, and on a pedestal that ends with a round foot. The coat of arms of the advisor of the Liège Echevins, Arnold Hocht, who died in 1607, are engraved under the foot.

This goldsmith's work – the prototype of which is the "tazza" of Italian craftsmen – was offered to Oranus at a time when coin collections were becoming more popular and the science of numismatics was developing in the North. This is particularly attributable to Hubert Goltzius (1526–1583), a student of Lombard, who recounted his visits to the collections of Lambert Lombard, Liévin Torrentius, Carolus Langius and especially, it should be noted, Robert de Berghes.

We still do not know the name of the Liège silversmith represented by the initials GH or HG. None of the names of goldsmiths that are known in this period match this two-letter combination.

In terms of the exact date of the goblet, the letter-date "L" should serve to pinpoint it, but the interpretation of the oldest alphabets – which is very flawed in Liège goldsmiths – is still only a plausible hypothesis. The date 1564, accompanied by a "probably", can be proposed however. This would also lend credibility to the tradition that the goblet was offered by the Prince-Bishop to his devoted collaborator as a sign of gratitude, or more likely on his behalf, during his resignation from his episcopal office on 14 April 1564. In fact, he had been brought there as a result of the deterioration of his mental health, with him already showing signs of anxiety as early as the middle of 1561.

It is interesting to compare the Oranus "tazza" with another, more traditional, Liège goblet offered by Jean de Juncis to the Court of the Aldermen of Liège in 1577. This is recalled in a tercet bt D. Lampson, which is engraved on this other goldsmith piece from the Renaissance. 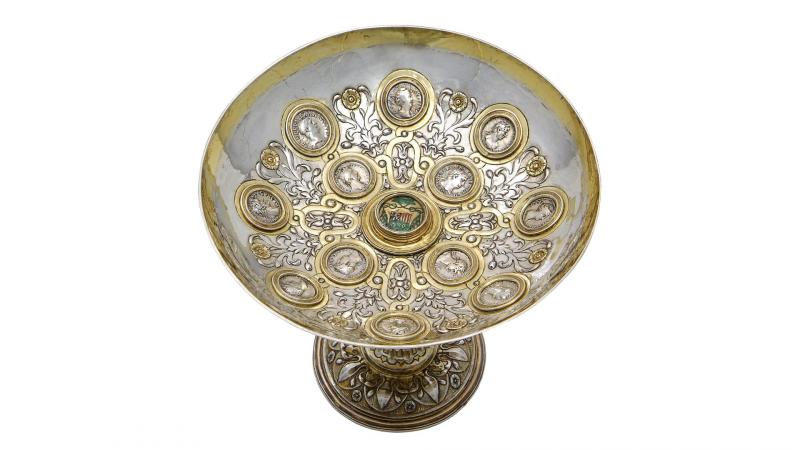