The manuscript in this binding was probably written around 930 and may have come from Stavelot or Reims. The upper cover of the binding appears to be composite. Elements from at least three different periods can be seen on it. The centre is occupied by the so-called Notger ivory, which is dated to the end of the 10th century. Around it are eight enamels from the 1160's. Four gilded and engraved biconvex plates from the 15th century are inscribed in the interstices.

The evangeliary comes from the collegiate church of St. John the Evangelist in Liege, founded by Bishop Notger (980-1008).

The ivory is the most remarkable element. It shows Christ in majesty from the Apocalypse, blessing with the dexter, his feet resting on the earthly sphere, inscribed in a mandorla framed by the symbols of the four evangelists. In the lower register, the donor, preceded by a cathedra, bends his knee and holds a codex in his hand; to the right stands an aedicule housing an altar. The peripheral inscription reads: "And I, Notger, weighed down by the weight of sin, am bending my knee before You who make the universe tremble". The kneeling figure could therefore be the bishop presenting his gospel book to his church. However, the question arises as to why, if Notger is the one who commissioned the ivory, he had himself depicted in a nimbus. Some people have seen this figure as King David. Unless the nimbus was added at a later date, so that the ivory could be used as evidence in a canonisation trial of Notger.... As with the Oxford ivory, to which it can be compared, the style of its figures seems to date from Notger's time and is a continuation of earlier Messinian ivories.

The eight champlevé enamels are typically Mosan in style. They represent allegorical figures of virtues (Courage, Justice and Temperance) and of the four rivers of Paradise (Fison, Geon, Tigris, Euphrates). The figures are distinguished by their animation and extensive use of red enamel, which is generally used more sparingly.

The biconvex plates are chiselled with ragged foliage, characteristic of the ornamental repertoire of Gothic goldsmiths in the 1400s. 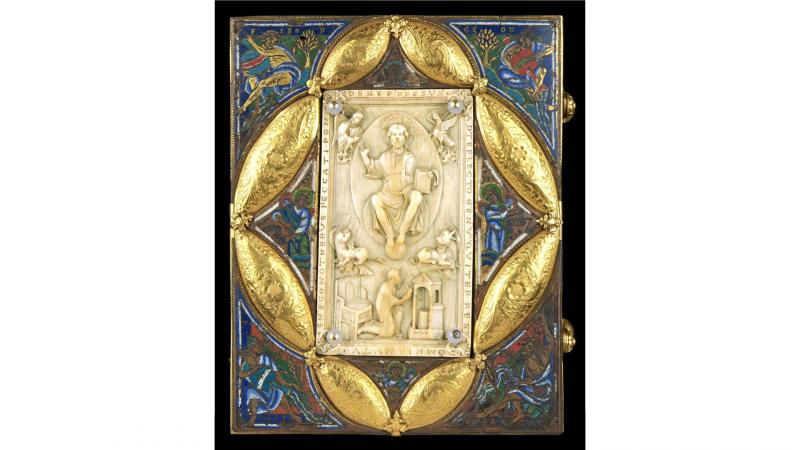