Work classified as a treasure by the Wallonia-Brussels Federation

The blue limestone basin, classified as a "treasure" by the Wallonia-Brussels Federation on 8 March 2017, was unearthed during an excavation campaign carried out between 2003 and 2005 by archaeologists from the Wallonia Public Service (Liège Directorate - Archaeology), on land belonging to the Saint-Amand church factory in Jupille-sur-Meuse.

The object, which dates back to the 2nd century AD, was buried in the preparatory layer of an exterior floor, in front of the eastern façade of one of the most important public buildings of the ancient town: the sanctuary (fanum).

The dedicatory inscription Apoll(ini) Smerturici Exsuper Mansueti f(ilius), set in a tabula ansata (cartouche flanked by dovetails) is of great interest: it tells us the name of the sanctuary's tutelary deity: Apollo, worshipped in his local form (Smerturix means "the provider, the protector") as a healing god or god of purification, and gives us the name of the dedicator, a peregrine (free inhabitant not holding Roman citizenship) named Exsuper, son of Mansuetus.

The basin probably served the faithful who wished to perform a purification rite before invoking the divinity.

Apoll(ini) Smerturigi Exsuper Mansueti f(ilius)
The inscription in a cartouche (tabula ansata) means 'For Apollo Smerturix, Exsuper, son of Mansuetus (offered this basin)'. In Jupilla, Apollo was worshipped in his local form (Apollo Smerturix means 'Apollo the provider, the protector') as a healing god or god of purification. 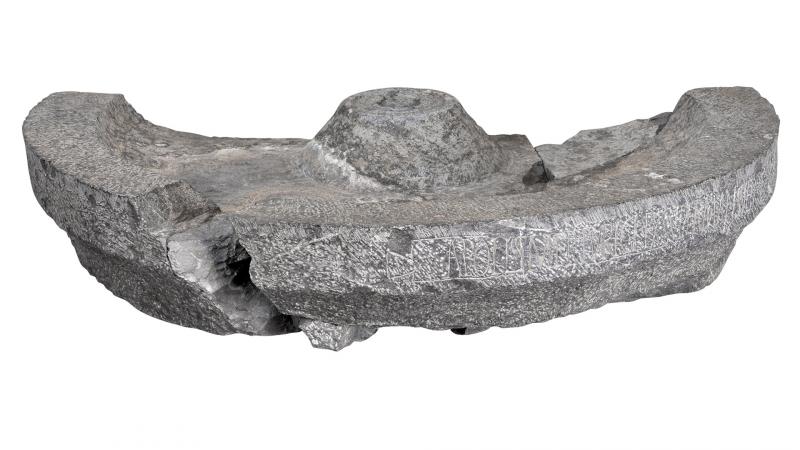